Emulsifiers – Are they harming your gut? 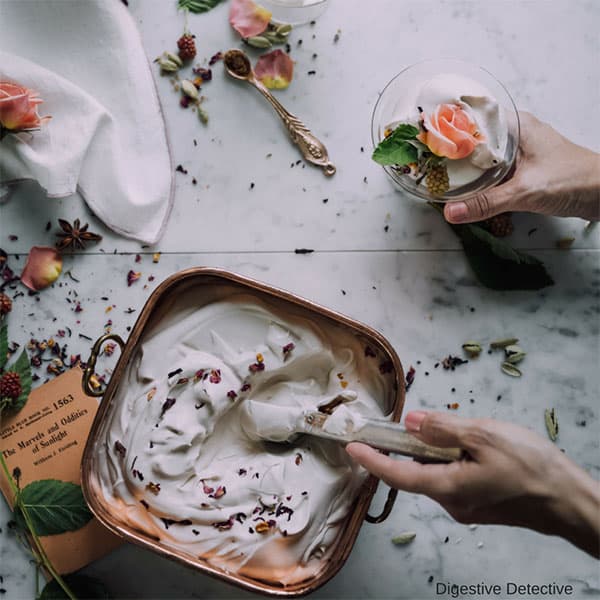 Emulsifiers make your ice cream smooth and silky and your chocolate bars bright, smooth and shiny. They help them stay on the shelf for longer and protect against mould growth. Getting the oil and water part of the ingredients to mix together for stablility is what they do best. One end of the emulsifier is water friendly and the other is fat friendly. A classic emulsifier is egg in mayonnaise. It essentially binds everything together.

A 2015 study published by Nature: The International Journal of Science looked at two specific emulsifiers; Carboxymethylcellulose (CMC) and polyscorbate 80 in mice. These synthetic emulsifiers increased metabolic disease and intestinal inflammation.

These emulsifiers act like detergent in the gut. They destroy good gut bacteria which the authors of the paper suspect lead to the mice over eating. This then triggers low grade inflammation. The mice were fed the same levels people would eat daily from the processed foods in their diet.

After 12 weeks of the mice eating these foods they noticed that the normal protective distance between the bad bacteria that sits on the top layer of mucous had been halved. The good bacteria was significantly reduced and the level of bacteria that break down the mucous layer had also increased. These ingredients essentially disrupt the barrier between the immune system and the gut bacteria.

A follow up study conducted by the same author suggested that the changes in gut bacteria could trigger bowel cancer. If your family has a history of Inflammatory Bowel Disease, it is wise to not eat foods with these ingredients at all.

If you would like to know more about how I could help you, book in for a free 15 minute GUT HEALTH ASSESSMENT and let’s get you started.